Filed under Trails
Difficulty (out of 3):TBA
Terrain: A wide variety of sites and terrain, from hills and fields to villages and historic sites. Please see each site individually to find out more.
Scroll down to see the Map

Welcome to Mapping the Past Guide to the cartographic heritage of the Clyde and Avon valley. Explore the life and accomplishments of Carluke-born Major-General William Roy, the father of modern cartography and see the changes in mapping since his time in the 1700s. Learn about different kinds of maps and how they help historians and archaeologists understand the past and landscape in more detail.

This guide has been designed to highlight the cartographic heritage of the Clyde and Avon Valley. Each site can be visited on its own and in any order. The entire route is quite long, and probably best done over a couple of days. Below are two suggests routes to take in all of the sites, which may be started at any point (map below).

The sites are accessible by foot or car. For public transport information go to Traveline, or use the widget on the right. Visiting some sites will require walking uphill or on uneven ground, so ensure you are wearing appropriate footwear. When visiting the places in this guide, please follow the Scottish Outdoor Access Code.

The trail was developed as part of the Mapping the Past project, managed by Northlight Heritage and delivered by CAVLP Heritage. 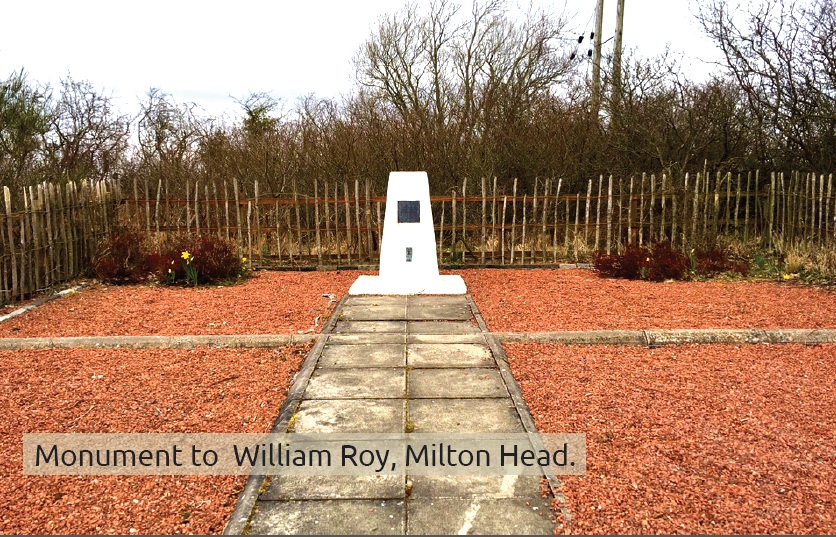 William Roy was born at Milton Head in 1726. By his death in 1790, Major-General Roy had changed the way we make maps – and consequently see the world – forever. In 1956 a monument in the form of a Trig Point was erected in his honour, by the OS, at the site of his birthplace at Milton Head, just outside Carluke. Another memorial to William Roy can be found in the town square of Carluke. Rather than taking the car, you can park in Carluke town centre and walk between the two memorials. You might actually walk the route which William Roy may have travelled as a young boy to the schoolhouse in Carluke High Street.

2. Cleghorn - Mapping the Roman past

One of Roy’s most important achievements was his survey of the Military Antiquities of the Romans in North Britain. Roy recorded many of the Roman remains of northern Britain for this first time. While archaeology has advanced our knowledge of this period, Roy’s surveys continue to provide us with important information, as many sites have been destroyed or damaged since the 18th century. Roy’s survey of the Roman Camp at Cleghorn remains one of the best records we have of this important Roman site. The camp occupies a defensive position overlooking the Roman road where it crosses the Mouse Water, and has extensive views to the south and west. The Roman road leads to Castledykes Roman Fort two kilometers to the South-West and the Antonine Wall to the North. The monument is best preserved in Forestry Commission Scotland’s Camp Wood, where traces of the ditch and rampart can still be seen.

The National Trust view point at Black Hill is celebrated as being one of the best places to view the Clyde and Avon Valley. However, Black Hill is also the location of a later prehistoric settlement and it is possible that people would have been living here as far back as 1000 BC. As you walk up the hill you will first encounter a large grass covered rampart, which encloses up to three house platforms, which are typical late Bronze Age (c. 1500BC – 800BC) settlements in the southern uplands of Scotland. At the northern end of the enclosure is the Trig Point, which sits on top of a possible Bronze Age cairn, offering panoramic views of the region. 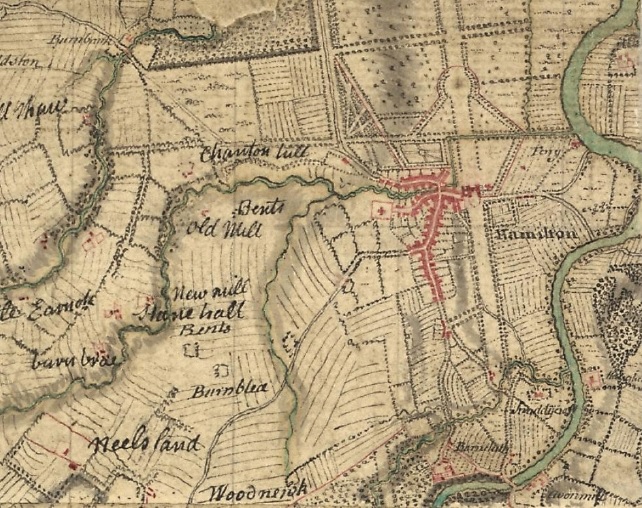 The Clyde and Avon Valley’s distinctive appearance is a significant part of why we value them. Woodlands, orchards, hedgerows, historic houses and their designed landscapes form patterns along the course of these two rivers, contributing to this unique and beautiful landscape which has been adapted by people for hundreds of years. One of the most important designed landscapes in the Clyde and Avon Valley is Chatelherault, and the High and Low Parks of Hamilton. Much of this once grand estate was lost through urban devlopment and quarrying, but William Roy recorded the estate at its height, as part of his Military Survey of Scotland. Both of these parks are open to the public and have excellent facilities, trails, walks and paths. 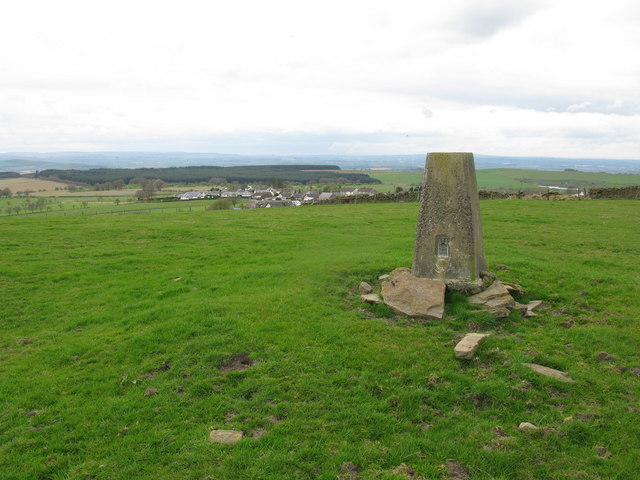 It’s 80 years since Trig Points were first used to Map the Nation. They were designed by Brigadier Martin Hotine to assist in the re-triangulation of Great Britain. The re-triangulation needed fixed points located across the whole country, which could be used to mount survey instruments. From each of these points it was possible to see at least two other Trig Points on a clear day. Using TRIGonometry, a system of triangles could be established between these points and across the nation. From these triangles accurate measurements of features and buildings could be taken, allowing for more detailed mapping than had been possible before. 6500 Trig Points were erected across the whole of the UK and five survive in and around the Clyde and Avon Valley. The three trig points in this guide are Headshill, Marshill and Black Hill.

8. Crop Marks at Draffan: Aerial Archaeology - Mapping from the skies 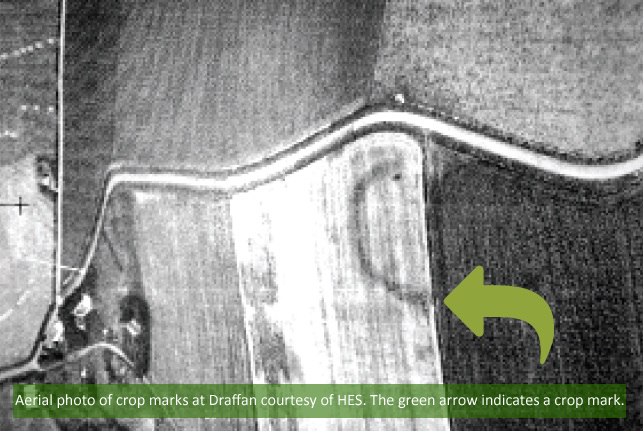 Aerial photography is a key tool used by archaeologists to understand and map the landscape. Aerial photographs have the ability to reveal hidden features not easily visible on the ground in the form of cropmarks. Cropmarks are formed when the growing rates of crops like wheat are changed by buried archaeology - the remains of ditches or pots holes, buried below the ground. Although a quiet farm today, evidence from aerial photographs suggest that Draffan was once the centre of a busy community. Since the mid 19th century this site has been ploughed away and can now only be seen from the air.

9. Names and Places - Dalserf and Nemphlar 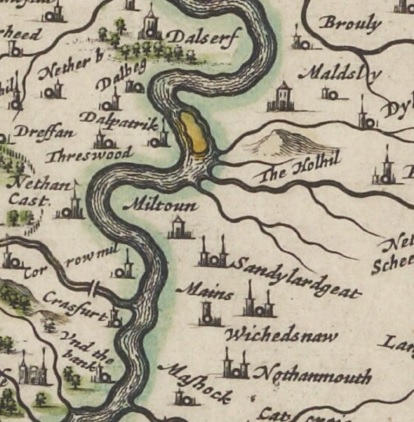 Maps are not just important for understanding how places developed over time and for navigation; they also record a host of information about place names. Working alongside volunteers, we have discovered a whole host of interesting places with long and important histories. Many of the place names in the Clyde and Avon Valley have a long history. Two place names in the Clyde and Avon Valley worthy of mention are Nemphlar and Dalserf. Nemphlar is possibly Brittonic in origin and possibly refers to an ancient assembly place where a king or noble would hold law courts. Who was this noble and why was the area around Nemphlar chosen as an important assembly place? 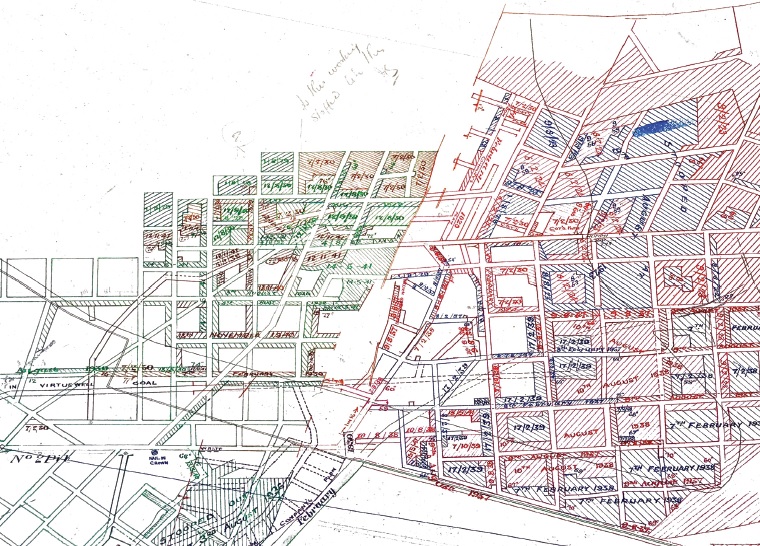 Historically, one of the most important industries in Lanarkshire was mining. At its height, the industry employed thousands of people across the region and much of the landscape was altered forever due to the massive extent of the coal extraction. Maps played a key role in the exploitation of this valuable resource and were especially important in charting the extent of each of the collieries. The map included here is that of the Cadzow Colliery next to Chatelherault, one of a number of collieries in the area.

Painted in 1969, Alasdair Gray’s 'Falls of Clyde' mural is one of Clydesdale’s hidden gems. Located in the Riverside Tavern at Kirkfieldbank, the 35 foot long mural maps out Gray’s own impression of the River Clyde, combining important natural and cultural heritage features. You can view the painting when the Tavern is open. Why not stop in for a refreshment after visiting the other sites on the guide? It’s a real treat for those interested in the creative side of map making.

Mapping the Past is delivered by Northlight Heritage, a partner on the Heritage Lottery Fund supported Clyde and Avon Valley Landscape Partnership (CAVLP), a project helping to celebrate and conserve one of Scotland’s most beautiful landscapes.

View the Mapping the Past guide on Issuu here and download and print your own copy by clicking the link under 'Other Resources' on the right of this page: