Filed under Trails
Difficulty (out of 3): 1
Terrain: Paved areas with some rougher tracks behind the New Town site. Gravel path in the North West side of the park.
Scroll down to see the Map

Make Your Way in Stonehouse on the Picture and Stone's Throw Trails. The Make Your Way digital trails can give you the opportunity to explore your local area online, and then go out and find all the details and beauty of the Clyde and Avon Valley for yourself. The Stonehouse trails offer great vantage points across the landscape, woodland paths, rough trails and great cycling opportunities.

Explore the trails using the numbered Heritage Points in the MYW maps, referenced in the descriptions below.

Download and print paper maps by clicking the links under 'Related Resources'.

A loop around King Street and New Street, going around the conservation area of Stonehouse, including the site of the New Town development. This trail also heads out to the Alexander Hamilton Memorial Park. Soak in the views from the park or explore the many heritage points along the way, including the two former picture houses.

1. Start in King Street at the carpark beside SPAR. Go along King Street towards Vicar’s Road and head right. 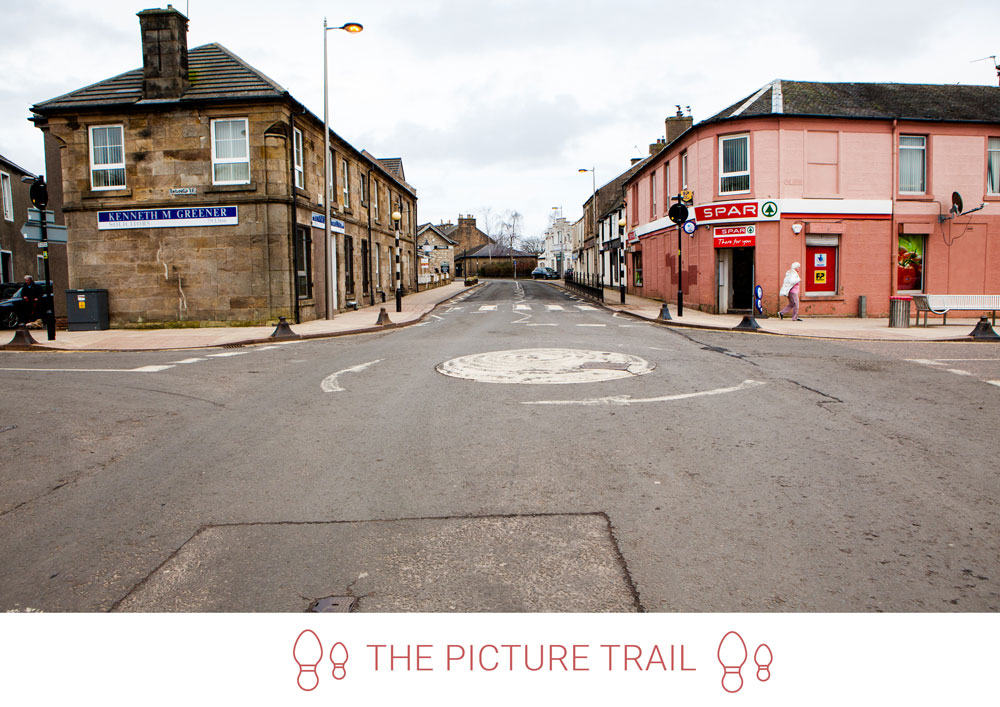 Walking up King Street, you can access a number of village facilities. Down Vicar's Road, you will find St. Ninian’s Parish Church, built 1896 to designs by Alexander Cullen, on your right (Heritage Point 10). Just off Vicar's Road is also the Stonehouse Bowling Club (Heritage Point 9) established in 1857, although only in residence at this site since 1900.

2. From Vicar's Road link to Manse Road, then take a right into Alexander Hamilton Memorial Park 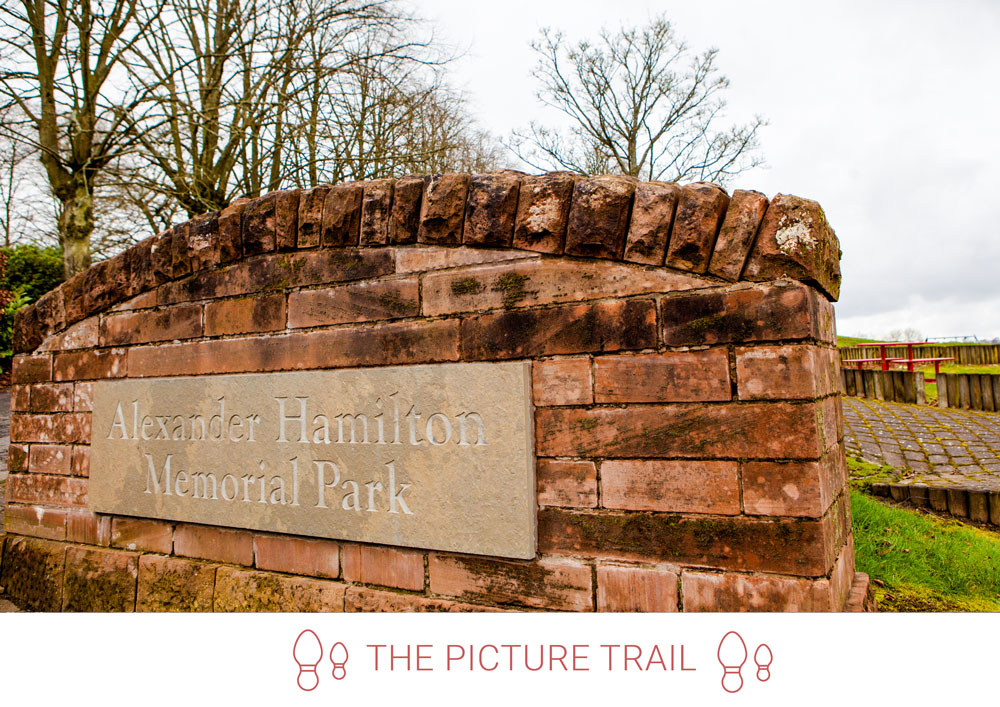 This image shows the opposite entrance to the park from Lawrie Street. Entering from Manse Road you can head down the paved path around the park and take a rough track to the left to get down to Avon Water. The latter is a beautiful, peaceful woodland walk. 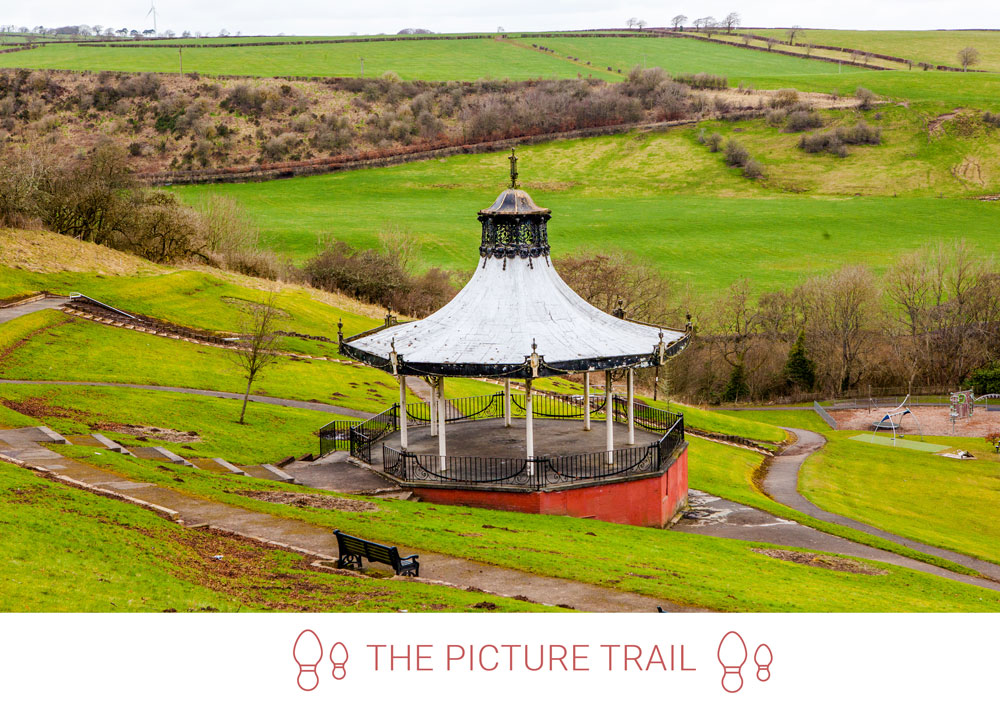 The park (Heritage Point 33), opened in 1925, was gifted by the wealthy carpet manufacturer of Stonehouse: Alexander Hamilton. The park features the Hamilton Memorial Fountain (Heritage Point 35), restored 1998, and the bandstand (Heritage Point 34) that originated in the 1911 Scottish National Exhibition in Glasgow.

4. Take in the views across to the former Stonehouse Viaduct. 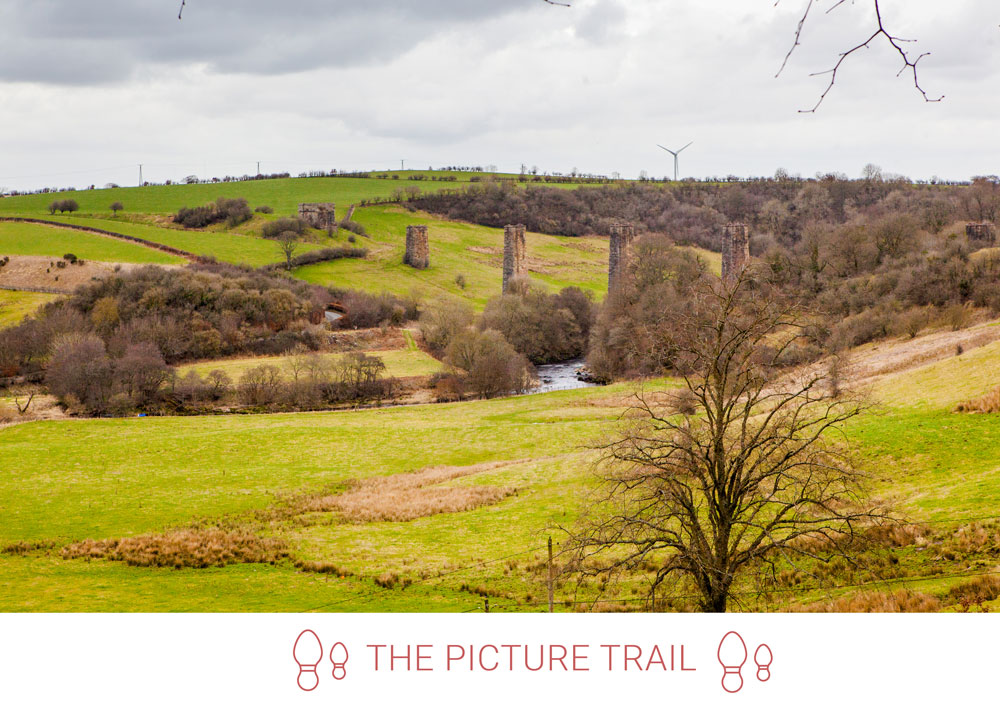 The remains of the Viaduct (Heritage Point 27) mark the relationship of Stonehouse to Larkhall where the sister viaduct is still intact. Constructed in 1904, the Stonehouse Viaduct, like the Larkhall Viaduct, was designed by Arrol and Company of Glasgow. It was demolished in 1984, with only the pillars left behind.

5. Exit the Park onto Lawrie Street. Walking under the A71, take the first left, linking to Green Street. 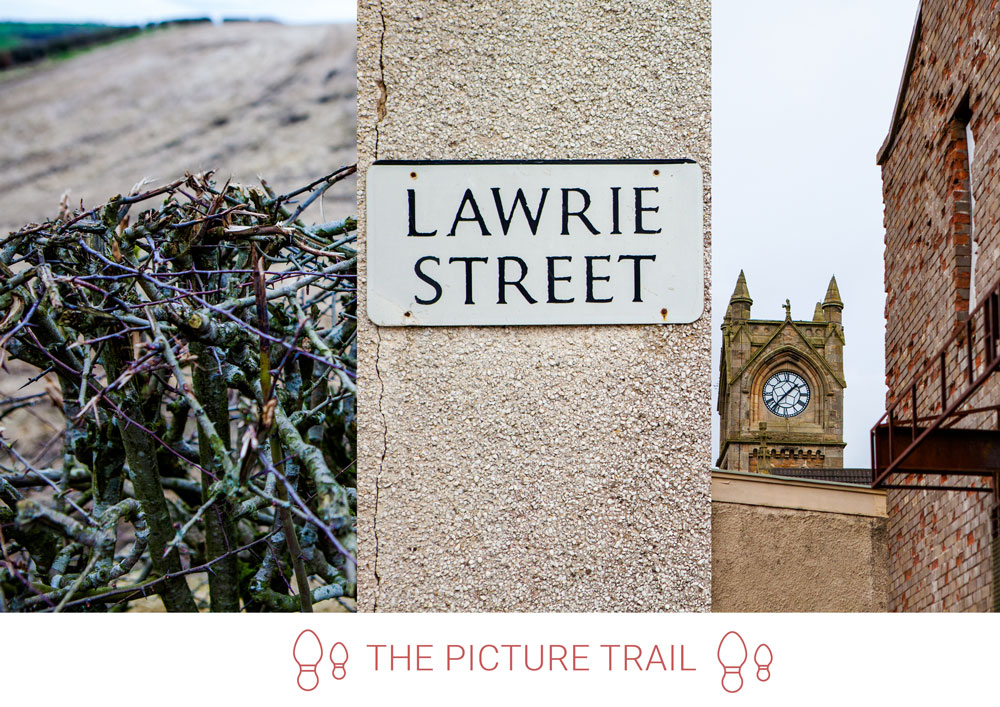 Lawrie Street opens out to great views of the adjoining fields and out to the remains of the Viaduct. It merges into Argyle Street with Paterson Church, opened 29th April 1879 (Heritage Point 17).

6. From Green Street go left onto Kirk Street connecting to Lockhart Street and around the former New Town Development. 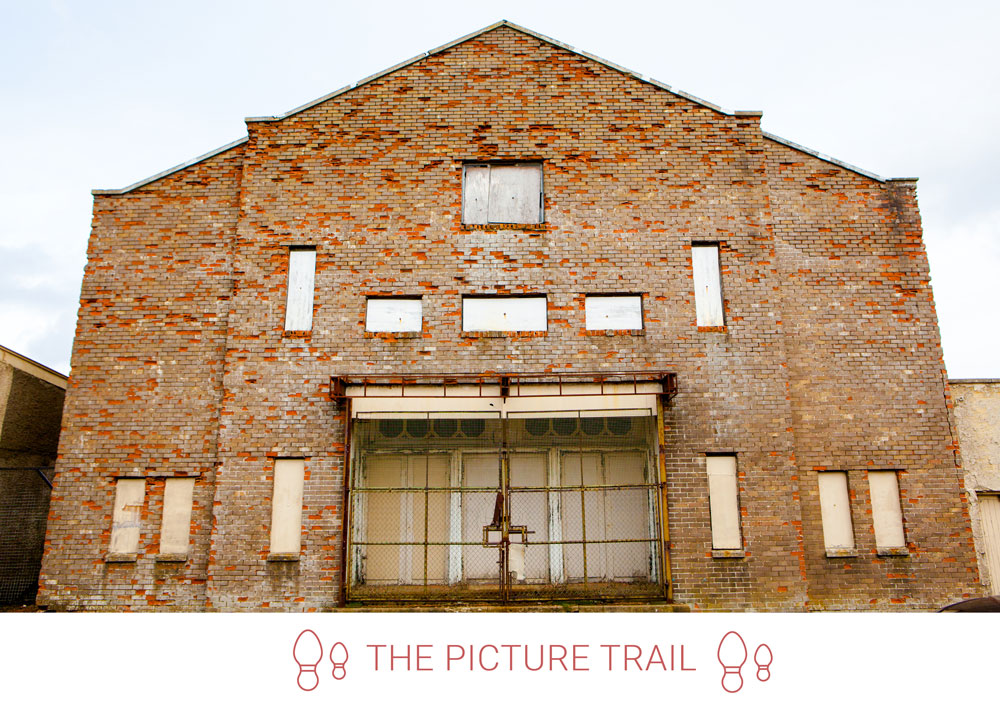 Backing onto Green Street, though facing out on Argyle Street, is the former Rex Cinema, opened in 1937. While the structure remains, and all the original features remain inside, it is now used for storage. In 1973 Stonehouse was designated to be a ‘New Town’, with an anticipated population of up to 70,000. This project would include 25 primaries, 6 secondary schools and the reintroduction of the railway line to Stonehouse. The scheme was dedesignated in 1977 (Heritage Point 38).

7. From Candermill Road go round the houses to Murray Drive. Take a left onto Boghall Street, then right, onto Angle Street. 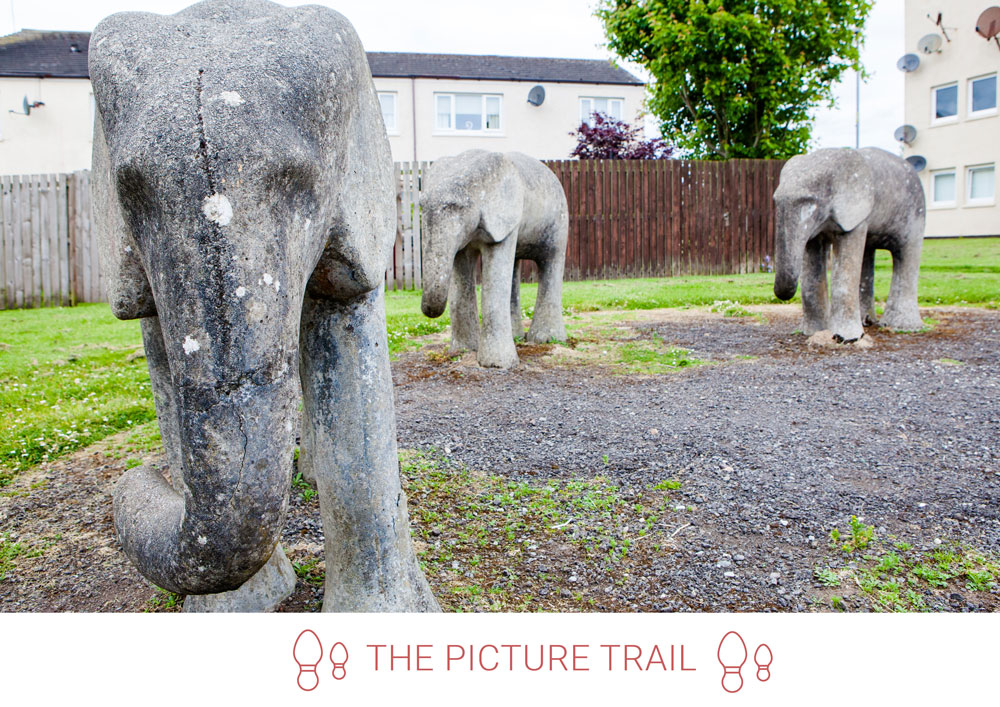 Along Murray Drive you will find Elephants (Heritage Point 25) cast in concrete by sculptor Stanley Bonnar around 1976 for the New Town development. At the bottom of Murray Drive is the site of the former Cam’nethan Street School (Heritage Point 24), once locally known as the ‘Dominie’ (Scots for school master).

Exploring the southern part of Stonehouse, this route connects through Stonehouse Primary School, Newfield Primary School, Stonehouse Lifestyles and the Hospital. It connects to more rural areas, and smaller green spaces, all only a stone’s throw away. Watch the Citizen Journalism film of the Stone's Throw Trail below. 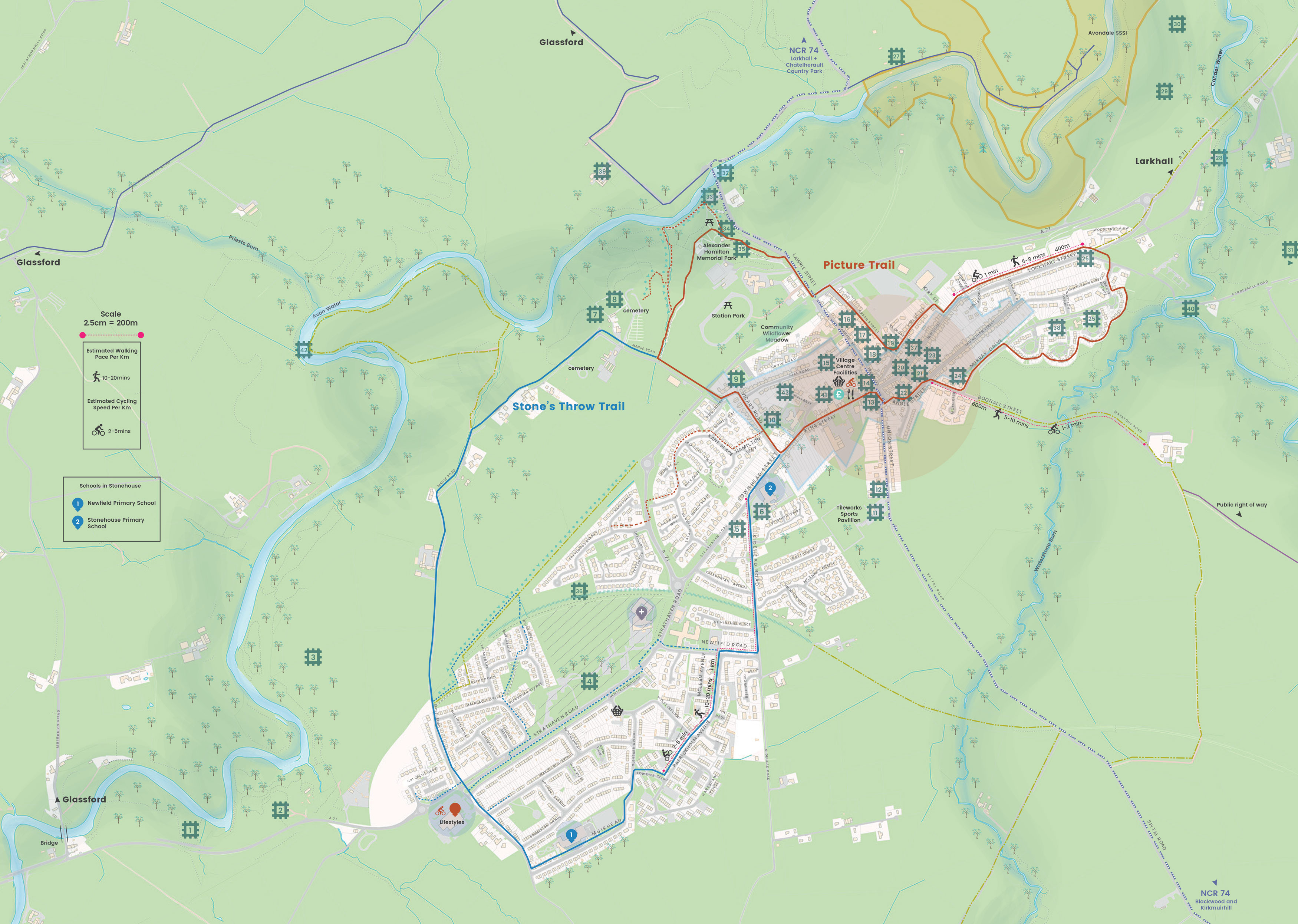 Make Your Way was an arts, heritage and active travel project focussing on the communities of Carluke, Glassford, Lanark, Larkhall and Stonehouse, 2016-17. The project was funded by Heritage Lottery Fund supported Clyde and Avon Valley Landscape Partnership and Smarter Choices Smarter Places grant, and delivered by icecream architecture and SYSTRA.