Morgan Glen is a beautiful wooded gorge near Larkhall, with a rich history and abundance of wildlife alongside the majestic River Avon. It features the highest railway bridge in Scotland and reputedly has its own resident Black Lady!

Originally part of Broomhill Estate, the woodland was bought by John Morgan, proprietor of the nearby Applebank Inn, as a safe place to walk for his wife. Upon her death in 1939, Morgan Glen was gifted to the people of Larkhall for their pleasure and enjoyment. In its heyday, Morgan Glen was host to a number of local social events from the Gala Day to regular dances that took place around the bandstand that was built there specially.

It’s said that the Black Lady of Morgan Glen still walks the woods today. She is thought to be the Sri Lankan wife of Captain McNeil – owner of Broomhill House, who brought her home after a sea-faring mission. According to legend, she was unhappy with her new life and disappeared mysteriously one night – appearing as the Black Lady now and then.

During the spring, you will see bluebells covering the woodland floor and hear the song thrush calling from the tree tops. As summer comes you will smell wild garlic or see a great spotted woodpecker in the canopy of birch, beech and ash trees. The Glen is also home to badgers, roe deer, foxes and rabbits.

Along the River Avon, look out for grey heron, mallard ducks and dippers amongst a variety of birds that live in, or visit the Glen. In the grasslands at the top of the Glen, you might see butterfly species such as the orange-tip, peacock and red admiral, fluttering about the foundations of Broomhill House, demolished in the 1960s. The butterflies may be feeding on thistle or knapweed flowers; the orange- tip can often be seen on its caterpillar food plant the cuckoo flower – a small, delicate purple flower. 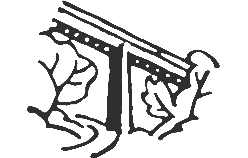