Say goodbye to the Christmas excess

The presents have been unwrapped, Christmas dinner leftovers devoured and you can’t decide what TV drama festive special to watch next… why not pull on your walking boots and get out to walk off some of the Christmas excess in the wintery Clyde and Avon Valley?

Since a lot of the beautiful local landscape is tucked away in ancient tree covered gorges and ravines, winter is an especially good time to get a glimpse at views otherwise obstructed by leaves and greenery in other seasons. Stunning vistas open up over the valleys, made even sweeter by the promise you made to yourself of a hot chocolate when you arrive home later.

We’ve put together our five favourite winter walks for you to try out, some long, some short, that take you through some of the best of what the Clyde and Avon Valley has to offer. Let us know how you get on and send us your pictures on Twitter, Instagram and Facebook. Go to Traveline Scotland for up to date public transport information.

Mix and match between the six brightly signposted trails in and around the tranquil village of Glassford on the Round the Yards, Round the White’ll, Round the Newark, Round the Stanes, Round the Kittymuir and Round the Burnside trails. Search out the beautiful old Glassford Kirkyard, the intriguing Glassford Stanes, the natural phenomena of ‘The Horsepool’, and don’t miss wonderful sweeping views down into the Clyde Valley. Link to the National Cycle Route 74 and the Avon Water from here too.

There are four other Make Your Way routes in and around Carluke, Lanark, Larkhall and Stonehouse that you can try out. Click here to see the links, and get a taste of what you can see in Carluke on the video below.

From the peaceful and historic village of Crossford in the heart of the Clyde Valley, this final / first stage of the Clyde Walkway (depending on what way round you do it!) runs through orchard country and spectacular wooded gorges, to New Lanark World Heritage Site and the natural wonders of the four Falls of the Clyde. Winter is a great time of year to stop off and marvel at Stonebyres Linn – first of the four falls, and difficult to see through foliage at other times of the year. Icicles are particularly impressive on the Falls on bitterly cold days!

This walk has various refreshment points, in particular the Kirkfieldbank Tavern where you can enjoy Alasdair Gray’s 24 foot long Falls of Clyde mural, Lanark and in New Lanark. A Clyde Walkway app makes following the route even easier. Download it from Google Play or the App Store for FREE.

Cartland Craigs is one of the most dramatic of the Clyde Valley’s wooded gorges, and one of the six woodlands that make up the Clyde Valley National Nature Reserve. Be sure to take in what is surely one of the most dramatic views in Lanarkshire with views of the Mouse Water tumbling away in the depths of the gorge – another view obscured somewhat by foliage at other times of year. Look down on to Thomas Telford’s Bridge which towers above the burn below, built in 1822 and reputedly one of the highest bridges in Scotland.

Continue past ancient oaks and towards the end of the walk you will pass the site of ‘Castle’ Qua, balanced on the edge of the precipitous gorge. The site was subject to the first ever archaeological excavation by CAVLP Heritage earlier in 2017, where it was confirmed that the site was Iron Age, not medieval as previously assumed. Unusually large defences were revealed, suggesting the site was very important in the Iron Age landscape.

Fancy meeting the Romans, Celts and Covenanters that once lived around what is now Strathclyde Country Park, RSPB Baron’s Haugh and Dalzell Estate in Motherwell? No time machine required! Step on to the Local Landscape Heroes: Phoenix Futures trail, and follow the purple waymarkers to take in some of the most important historical features in North Lanarkshire, including Roman Baths, the Clyde Bridge and St Patrick’s Churchyard.

Phoenix Futures service users chose the sites and carried out vital conservation work on a number of them, in partnership with CAVLP Heritage. Watch the video below to find out more!

A pleasant, linear route, descending through rolling arable farmland of the Clyde Valley, starting from the old mining, textile and weaving settlement of Larkhall, and ending with lovely views over the Clyde, where there was once a ford. The nickname is stuff of local intrigue – does ‘Monkey Road’ refer to the Monks from Lesmahagow Priory who used this route to Cambusnethan Priory? Or does it refer to the coal miners employed at Millburn Colliery who used to use this route between work and home, no doubt bent over like monkeys after a day down the pits? Something to ponder as you cross over the old railway line that once transported coal from the pit.

The largely steep gorge terrain of the Clyde and Avon Valley is not well suited to all ability access routes. However, all ability routes are available along the Boardwalk following the River Clyde at New Lanark World Heritage Site and Scottish Wildlife Trust Falls of Clyde.

65 km of trail opened up to digital users 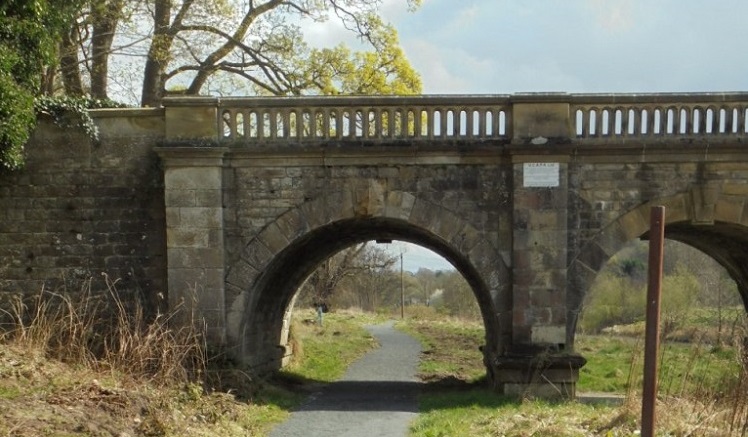 Vital section of one of Scotland's Great Trails restored