Creation of a historic tour at the Falls of Clyde

- Allison Galbraith: storyteller, folklorist, collaborative community artist and educator. This email address is being protected from spambots. You need JavaScript enabled to view it.

In 2013 the Scottish Wildlife Trust (SWT) and I piloted a Victorian themed tour of the Falls of Clyde in Lanarkshire. My character, Lady Geraldine Lockhart-Ross, was the daughter of Lady Mary Ross, who was the original promoter of the tours to the pre-Victorian tourists of the early 1800s. Click on 'Victorian Trail Leaflet' under 'Related Resource' on the right, to see a number of the places and stories which my tour cover.

'Petit' tours of the British countryside were popular amongst the gentry during and after the Napoleonic war (the grand tours of Europe had been very much in vogue up until this time). Dorothy and William Wordsworth were amongst the many famous people who visited the Falls of Clyde on their Petit tours, in 1803 and again in 1822. Dorothy's diary gives us vivid descriptions of their journeys through Scotland, and proved invaluable for my research.

The more I read about the Bonnington estate, and in particular the Lockhart-Ross families' contribution to the British tourist industry, the more my storytelling instincts were aroused. Agricultural improver Sir John Lockhart introduced sheep to the Highlands and his son, Sir Charles turned the family home into a champion chicken roost. The family were landscape designers on a grand scale, they planted the trees specifically to frame the views of the waterfall; some of the first Douglas Firs in Britain were planted across the gorge by David Douglas in 1827. Lady Mary cannily perpetuated myths about William Wallace's connection with the area, i.e. Wallace's Chair and Wallace's Cave, where he supposedly hid from English soldiers. Their local home, Bonnington House (now gone), stood adjacent to the ancient gorge through which the river Clyde carved its way, and at one time was certainly the home to an original portrait of Wallace, a medieval wooden chair, and carved wood and silver oaken-cup, purported to have belonged to him (his connection to Bonnington through his wife Marion Braidfoot, a local noble woman). These items are now in the possession of Mohammed Al Fayed (owner of Harrods in London), kept at Balnagowan Castle in Ross-shire – this was the Lockhart-Ross family's other residence.

As well as the rich social history of the area, the tour is packed with local legends and story. The abundant flora and fauna along the way gives me the opportunity to share choice snippets of folk-belief and ancient customs pertaining to folk medicine, charms and witchcraft. This is also a wildlife reserve, so you can expect some birdlore, and fascinating facts about Victorian attitudes towards nature thrown in for good measure.

Michael Portillo visited during the summer or 2014 and filmed the Falls, alongside an interview with me, in full Victorian costume. This was broadcast on BBC2 on Wednesday 7th January 2015– Great British Railway Journeys, Series 6, Motherwell to Linlithgow.

Tours can be arranged for community groups by phoning SWT on: 01555 665262 - Contact Laura Preston: This email address is being protected from spambots. You need JavaScript enabled to view it.

Take a closer look at the trail by opening the digital trail below, 'Fall of Clyde Victorian Tour,' under 'Related Projects,' or by picking one up from the SWT Falls of Clyde Visitor Centre.

It's a  long, but slow walk with a steep hill up to the waterfall viewing platform, so good walking shoes are a must. 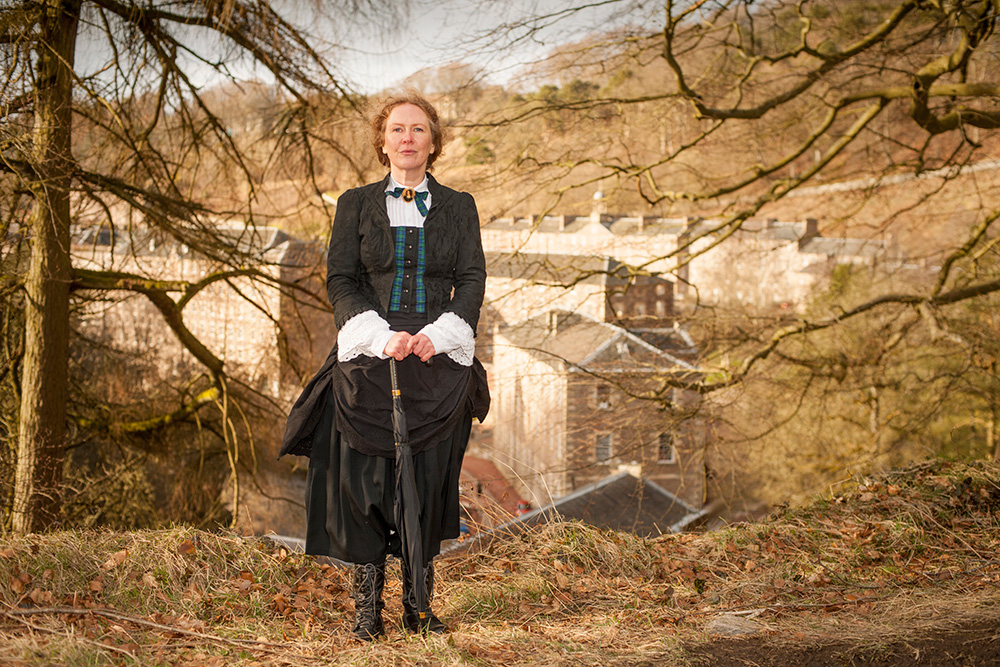 Final Free Victorian Visit to the Falls of Clyde

This Friday offers a last chance for visitors to experience a new interpretation of the truly magnificent landscape at Scottish Wildlife Trust (SWT) Falls of Clyde near New Lanark for free!

Victorian Visits to the Vistas of Falls of Clyde