Redcoats Launch Mapping the Past Project at Cleghorn Roman Camp

The project, ‘Mapping the Past,’ will be led by CAVLP Heritage and facilitate the exploration of the area’s unique past through map based learning, research, design and making for locals. It is delivered by Northlight Heritage as a partner of the Heritage Lottery Fund supported Clyde and Avon Valley Landscape Partnership (CAVLP), and supported by Historic Scotland and Renewable Energy Fund managed by South Lanarkshire Council.

Cleghorn Temporary Roman Camp near Lanark was discovered and first surveyed by William Roy in 1764 as part of his comprehensive survey of Roman antiquities of Northern Britain. 225 years after his death, on Friday 10th July, this very survey was re-enacted by the CAVLP Heritage team in full 18th century costume and with authentic survey chain and flag, where they could explore the finer details of 18th century surveying. The survey was preceded by a pilgrimage to the monument of the visionary cartographer’s birthplace at Miltonhead, near Carluke.

A CAVLP Heritage Meet and Greet followed the survey at David Dale’s House in New Lanark the following day. The team introduced visitors to the upcoming workshop streams through a series of activities. They drew maps from the survey data they collected on Friday, one in a traditional style using ink and fountain pens and another in a more creative, crafts based style. The team also ran some small surveys using the 18th century equipment, encouraging visitors to help out and handle the tools.
"It's great that you're here telling us about him," a visitor to New Lanark on July 11th said, "I had heard of William Roy before but I didn't know he was the father of the Ordnance Survey." 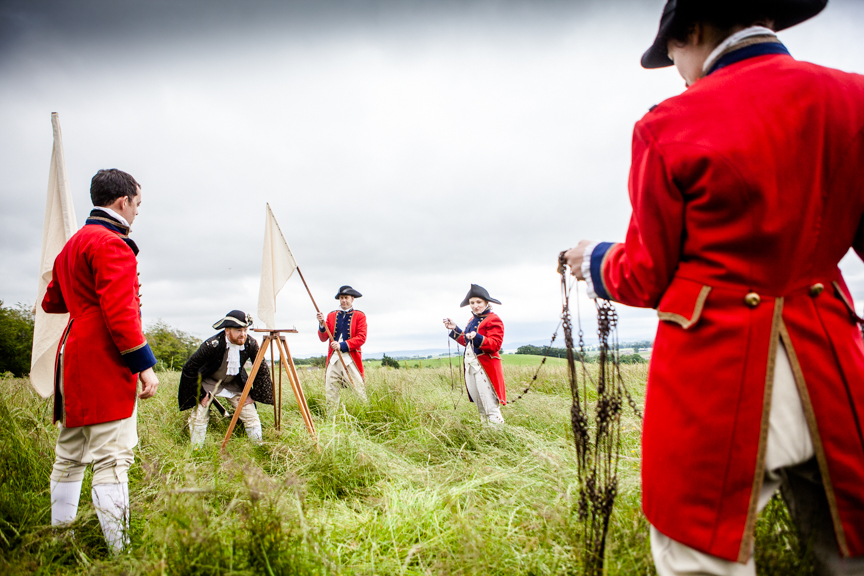 The two main workshop themes which will run over the summer and autumn, are map-based research workshops and Crafting Maps workshops. The map-based research workshops will introduce participants to using historical maps to explore their heritage and learn about the changing landscape. The Crafting Maps workshops will be focused on creating different kinds of maps so that people can explore their connection to the Clyde and Avon Valleys. The team will also be running and hosting events and activities that will celebrate the rich mapping heritage of the Clyde and Avon Valleys.

“We hope there will be a workshop or event which will allow most people to get involved in some way with CAVLP Heritage.  Please contact the CAVLP Heritage team, whether you are interested in learning more about Major-General William Roy, developing new heritage skills, creating different kinds of maps or volunteering to help research more about the landscape and history of the Clyde and Avon Valleys,” says Gavin MacGregor, a director at Northlight Heritage and Manager of the CAVLP Heritage Programme.

The team encourages anyone who is interested to contact them at This email address is being protected from spambots. You need JavaScript enabled to view it. for further details, or following them on Facebook at www.facebook.com/CAVLPHeritage or on Twitter @CAVLPHeritage to keep up to date with events and workshops.

Lanark Library to host Mapping the Past Exhibition and Guide Launch

Members of the public are invited to attend the FREE Mapping the Past pop-up exhibition and guide launch will take place on Monday 12 September, at Lanark Library.