Majestic salmon to leap the Avon Falls once again

The Atlantic salmon is one of the truly iconic species of Scotland and a source of considerable national pride.  The country is home to some of the finest salmon rivers in the world and these contribute significantly to the Scottish economy as a visitor attraction, a source of jobs and income in remote Scottish communities, and the provider of high quality world renowned salmon food products.

In the Autumn and early winter, salmon ‘steal the show’ as they make their way back from the ocean and leap spectacularly up river to their Scottish breeding grounds.  But not so in the Avon Water! 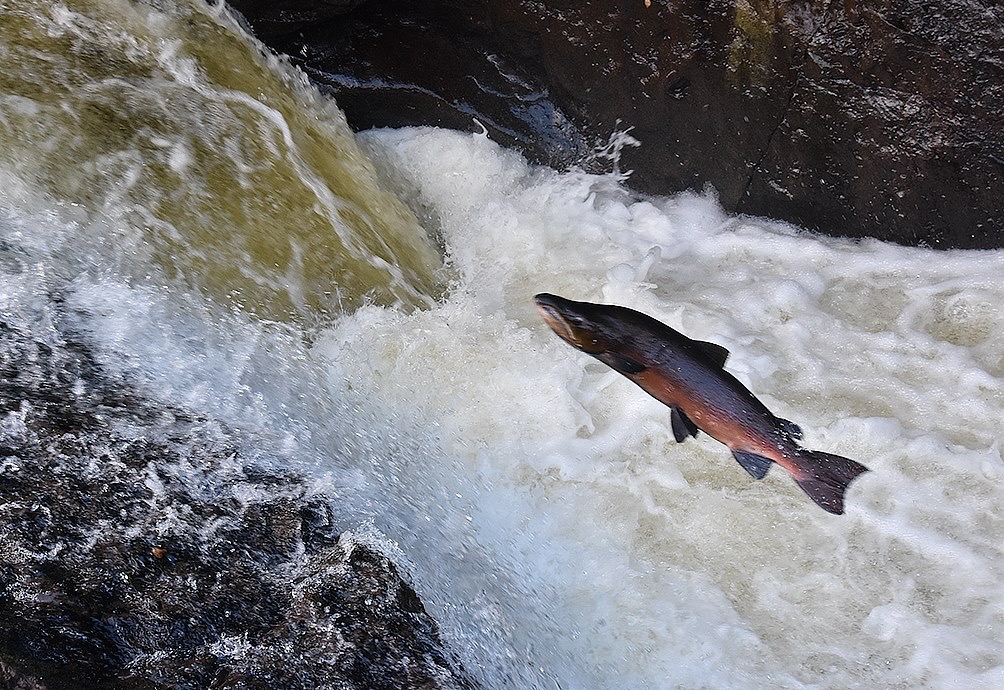 Atlantic salmon became virtually extinct in the Clyde in the 19th century.  Over the last 40 years, improved treatment of domestic and industrial wastes and reductions in industrial discharges have resulted in sufficient improvements in water quality in the lower rivers and upper estuaries of the Clyde to allow salmon to return.  But in some rivers including the Avon Water, barriers are preventing them from reaching their spawning grounds.  On the Avon, salmon are ‘queuing up’ under the Ferniegair Weir desperately trying to leap up river to spawn.  This is currently to no avail since Ferniegair Weir and the Millheugh Weir further upstream are impassable.

Imagine the excitement then to hear that Atlantic salmon will leap the Avon Water once more - a sight that has not been seen for over a century.

This is all down to a flagship partnership project between SEPA, Rivers and Fisheries Trusts Scotland (RAFTS), Heritage Lottery Fund Scotland supported CAVLP, South Lanarkshire Council, Clyde River Foundation, anglers and local communities supported by SEPA’s Water Environment Fund and the Heritage Lottery Fund.  Natural rock fish passes will be installed at the Ferniegair and Millheugh weirs (built in late 19th century to serve local mills) in the summer of 2016, meaning that Atlantic salmon should be leaping the weirs in autumn 2016. Please view the plans by clicking the link on the right.

The fish passes will open up approximately 200km of salmon spawning grounds in the Avon Water and upgrade the Water Framework Directive status of 8 rivers in one fell swoop, six of which will achieve high status.  This gives the potential to create a whole new salmon fishery within the Clyde system bringing with it an increase in sports fishing and income from fishing permits and a boost to the local economy from fisherman and visitors using local amenities.

The Avon Barriers Project will also be a source of great excitement and pride for local communities.  The Clyde River Foundation works very closely with schools and communities in the Clyde area promoting fishing and the importance of healthy ecosystems and is planning a Clyde wide celebration of salmon homecoming when fish passage is secured across the Avon Water weirs.

The return of the iconic Atlantic salmon to the rivers of the Clyde symbolises the importance of Scotland’s magnificent environment to the Scottish people and economy.

“The watercourses of the Clyde and Avon valleys are an important and unique habitat for native wildlife.  For this reason, we have always viewed our involvement in this project as a vital part of delivering our overall Heritage Lottery Fund supported Programme”, explains CAVLP Programme Manager Donna Marshall.

She continues, “A public meeting has been organised to allow local communities and anglers to find out more about the project and view the proposed designs.  Taking place in the Auditorium, Chatelherault Country Park Visitor Centre, Hamilton at 7pm on Tuesday 8 March, we would love to see as many people attend as possible and have the chance to ask questions about this exciting and vitally important project.”