Lost and forgotten gardens of old

As the weather seems to finally be improving (sort of!) the Glorious Gardens volunteers have been getting out and about at various sites to record some of the components that remain from the lost and sometimes forgotten Clyde and Avon Valley gardens of old.

Volunteers have undertaken (and are still gathering) desk based research from various online resources and archives such as Canmore, Pastmap and National Collection of Aerial Photography (NCAP), as well as tracking down documents, maps and written accounts of the area in local archives such as Lanark Library.  On sites where access has been permitted or is open to the public, visits are recording information on the ground that could easily be lost by the further passage of time - for example at Carfin some garden sculpture was noted and the remains of a low level gateway and decorative wire railing which seems to have separated a Clydeside pleasure walk and the iron footbridge from the mansion house pleasure garden.  It was also noted that the policy parkland to the west of the house has been much reduced from when the (now demolished) house was present and the driveway has been altered as housing now lies between the lodge house and the current approach (which links into the old drive). 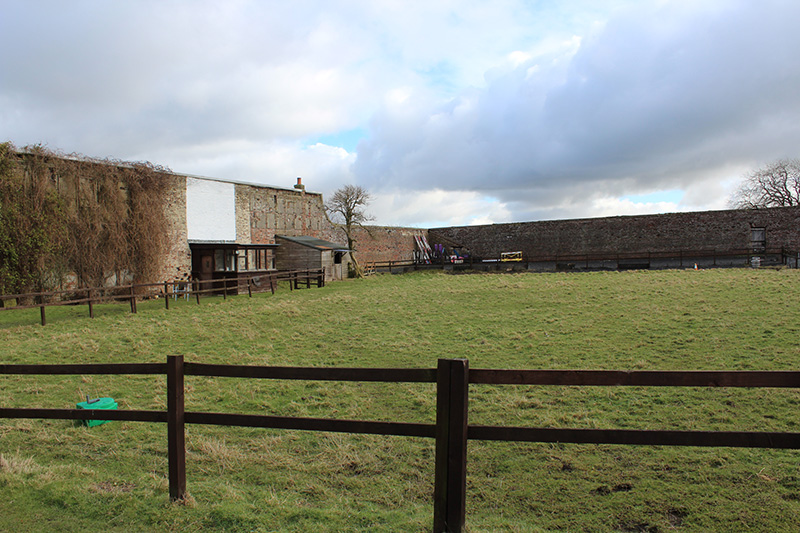 As further information emerges about Carfin, at Stonebyres visits have revealed that many elements remain here too despite the loss of the main residence once again.  A recent visit involved looking at the walled garden.  Previously maps had revealed the presence of glass houses on the interior northern wall (south facing).  On site the central part of this wall was noted to be higher than the other walls and there was a built in chimney - a heated wall!  There was also evidence to support the presence of the onetime glasshouses in the walls where the line of the roof structure could still be seen sloping across the brickwork. Some of the residents of Stonebyres were also very friendly and forthcoming about the knowledge they had regarding the property and shared stories, facts, photos and even postcards which was fantastic!

Elsewhere, desk based research is ongoing on a number of other properties and visits are planned when this is largely completed - it's not been easy with the horrendous weather that we have had over the winter months - but hopefully things are drying up a bit as we enter spring.

Volunteers for the CAVLP area are meeting again on Tuesday March 8th at 10am-1pm in David Dales House at New Lanark. We are always happy to include more people in this project so if you are interested please email Lorna Innes at This email address is being protected from spambots. You need JavaScript enabled to view it. and we can see how best to bring you into the project!