A project offering an amazing glimpse at the history of RSPB Scotland Baron’s Haugh has been completed featuring excavations, historic walkways and replanting of ancient parkland and orchards.

Easily accessible from Motherwell, Hamilton and Wishaw, over 40 local volunteers completed just under 500 hours of work under the guidance of RSPB Scotland Warden Stephen Owen.

A substantial part of the project focussed on replanting an area of ancient parkland and tree lined avenues leading from the historic and stately home of Dalzell House to the banks of the River Clyde.

Young Sweet Chestnut Trees were planted in between, and will eventually mature and replace centuries old Horse Chestnuts which line Chestnut Walk. The young trees are not susceptible to the same diseases as the old trees which have been under attack from disease for some time. 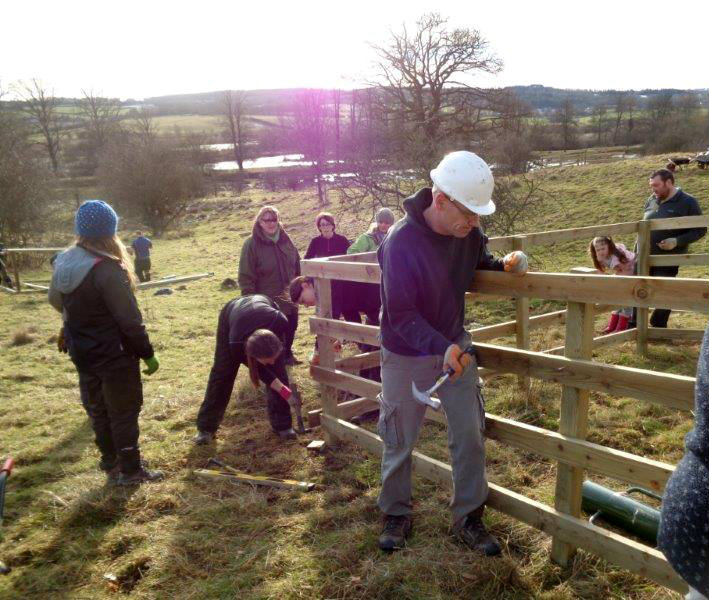 50 school children from Muirhouse and St Brendan’s Primary Schools also helped to replant the orchard that would have once supplied fruit to the Estate, learning about the fascinating history of RSPB Scotland Baron’s Haugh and Dalzell Estate in the process. Visible from the old stone bridge over Dalzell Burn, young apple, damson and plum trees have replaced the few gnarled pear trees that previously remained. Some are flowering already and this autumn will herald the first fruit harvest in decades.

“One of the most exciting parts of the project for me was the restoration of the curling pond. We were aware that the pond existed but it had become silted over due to not being used for some time. We have very good records of how the designed landscape has been developed over the years and historic Ordnance Survey maps allowed us to accurately re-create this very unusual feature” explains Gerry McAuley, RSPB Scotland Area Reserves Manager.

“Located in the corner where the ancient parkland meets Chestnut Walk and the Clyde Walkway, we found out that the curling pond had been in use from the 1860s up until World War 1. Excavations uncovered a clever system of sluices and pipes leading from Dalzell Burn which allowed the pond to be filled and drained as required. The pond has been thoroughly cleared of silt and vegetation and provides a glimpse of how this part of the reserve would have looked when it was a fully functioning part of the Dalzell Estate. It also complements the other habitat improvements taking place on the reserve by providing additional open water for ducks and wildfowl and a home for amphibians too in addition to the existing wetland.”

Donna Marshall, Clyde and Avon Valley Landscape Partnership Manager states, “the project lifts the lid on forgotten stories of the reserve and reflects the heritage of majestic Estates and the rich growing heritage of the wider Clyde and Avon valleys area. It’s an added benefit that the work improves biodiversity for a range of wildlife found on the reserve including woodpeckers, jays, pipistrelle bats and a variety of invertebrates and amphibians.  This project is just one of nearly 70 projects that CAVLP are funding within the Clyde and Avon valleys which celebrate the special character and distinctive features of our local landscape.”

Interpretation boards including information on the history of Baron’s Haugh are due to be installed later in the month. Make sure you take a wander down to explore yourself, or join the free Spring Evening Walk on the Reserve at 7pm on Tuesday 26th May which is part of the CAVLP Spring Walks Festival. Free but booking essential at www.cavlp.eventbrite.co.uk.