Young volunteers improve paths for all

The Cleghorn Glen is a Scottish National Nature Reserve managed by Scottish Natural Heritage that takes in the steep gorges of the Mouse River as it runs between Cleghorn and Cartland Bridge. Some sections have become badly eroded and represented a hazard to walkers. The aim of this project was to cut the path further away from the cliff edges, install steps where the path was becoming too muddy and install some drainage and anchor bars to prevent any further erosion. 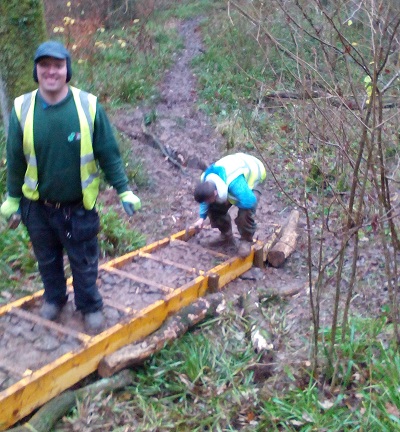 The project was delivered in two weeks during November 2014, so we were extremely grateful for clement weather as the task would not have been possible either from a practical or Health and Safety point if there had been any significant rainfall.

The project was delivered by us at Clydesdale Community Initiatives along with a number of our volunteers. Due to the distances that need to be walked to reach the working sites and the slipping and falling risks the project focussed on using volunteers who had no spatial awareness or mobility issues. One of the main training points that had to be mastered by everyone when passing another worker on site, was to touch them and shout ‘behind’ like in a working kitchen. Our volunteers were made up of the usual inter-generational mix, however it appeared that the project suited the young people and they soon worked out one end of a mattock (hand tool for digging and chopping) from another. Overall 9 volunteers participated with 7 of them being aged between 15 and 17.

Apart from the basic cutting of the new path there were opportunities to learn skills such as, building boxed staircases, installing culverts, building anchor bars with locally won stone and installing discrete steps where the slopes weren’t too severe.

As most of the participants where younger with no previous experience of working in a less accessible sites, the job offered a number of additional lessons over and above the obvious practical skills, the benefits of planning and organising your lunch and a hot drink before you leave work in the morning became apparent after a few days where the shops were not available!

The experience of a full working day out in the field was also new to a lot of the young people and they will be in a much stronger place to when talking to potential employers in the future.

It’s dirty work, but someone’s got to do it.