The Nemphlar Channel at Auchenglen is a 3 km long dry river valley which is thought to have once carried the Mouse Water north-west from Cartland Bridge to join the Clyde along what is now the lower reach of Fiddler Burn.

It is best viewed from Black Hill, or from the sweeping view across the valley at the hairpin corner at Cartland Bridge Hotel, as you leave Lanark and head along the A73 towards Carluke. The Channel is now intersected at its southern end by the gorge of the Mouse Water and its northern end by the deep cut of Fiddler Burn. 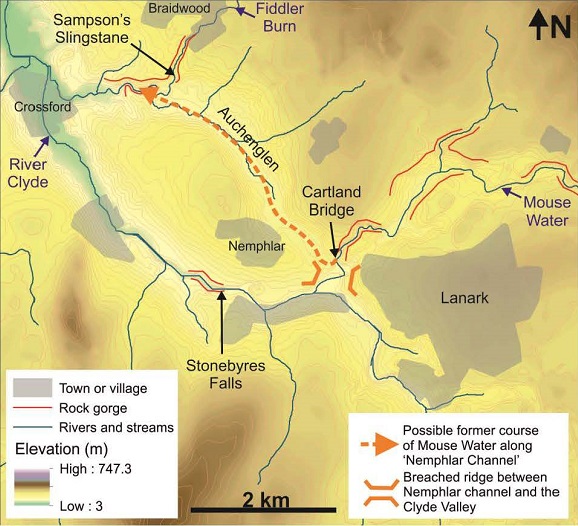 The Nemphlar Channel is partially infilled with glacial till, a deposit of compacted clay and stones formed under ice, which was left behind during the last ice age 20,000 years ago. The channel was likely abandoned when pressure from the melting glacier front forced the Mouse Water to cut a new course that burst through the narrow ridge separating the channel from the main Clyde Valley. As the ice retreated, the Mouse Water continued to flow in the new gorge to the Clyde, bypassing the Nemphlar channel.

The alteration of river courses through the cutting of new valleys forms a characteristic feature of the Clyde and Avon Valley and is most easily viewed at the Falls of Clyde. Infilled valleys and deep gorges, along with the evidence for the formation of pro-glacial lakes, are found throughout the area, reflecting extensive reconfiguring of the drainage system during and after glaciation. The network of young valleys formed during this period include the deeply eroded channels of the Mouse Water and Avon Water, as well as many smaller streams, including Fiddler Burn and Garrion Gill.