What's in a name?

One of the historic little lanes of Lanark, which served as a thoroughfare for people to collect water from St Patrick's Well. In use for hundreds of years, closes like this in Lanark often changed names, frequently to reflect the name of a notable person who lived nearby. In this case the name Jookers Johnnie seems to have stuck, and dates back at least a century or two. 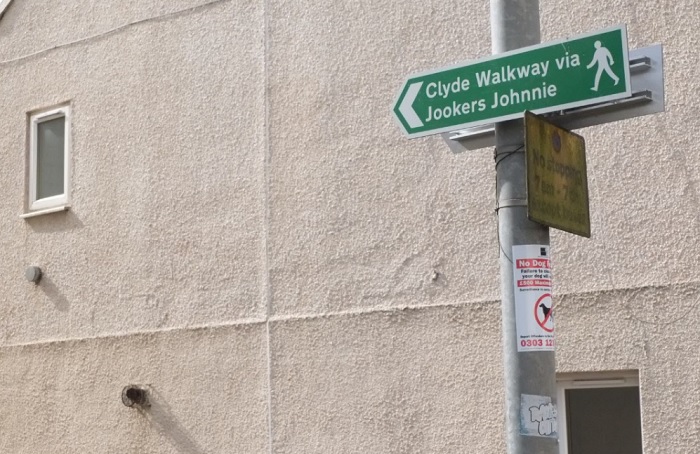 The origins of the name have been widely speculated upon, with a variety of stories around to explain it. However, the name of the lane actually predates many of them. What is known is that an outbuilding located along the lane is recorded as a "killing house", and that the attached home was owned by a Miss Jean Wilson. She was a butcher by trade, a profession which would make her an important figure in the local community, and an unusual one for a woman at that time . Her nickname is recorded as being 'Jicker Jean'.

It's close, but how does 'Jicker Jean' lead to 'Jookers Johnnie'?

It is also known that Jean's father was Mr John Wilson. If he shared a similar nickname to his daughter, and following the old Lanark custom of naming the closes, it's only a slight jump from Jicker Johnnie to Jookers Johnnie. Interestingly, the word 'jook' is used in Scots to describe a sudden movement or duck, and one can imagine 'jooking' down the close as a shortcut.

Jookers Johnnie led to St Patrick's Well, one of the best supplies of water in the Burgh, and it was used by many residents of the West Port, Bloomgate and Friars Lane areas, despite the effort needed to transport the water. It became even more important when the well on West Port, among others, was found to be contaminated. It remained an extremely important water supply until the completion of the Loch Lyoch water scheme in the 1880s. It was deemed by the council that the close should have a minimum width of four feet, which was wide enough for water buckets to be carried over the shoulders on a wooden yoke.