The Clyde and Avon Valley has an abundance of archaeological heritage, much of it yet to be fully explored. One collective working to uncover the mysteries of the valley is local amateur group, Lanark and District Archaeological Society.  Hannah Devlin, volunteering with Clyde and Avon Valley Landscape Partnership project, collaborated with Lanark and District Archaeological Society to create an Investigating the Past pop-up exhibition at Lanark Library. Hannah curated the exhibition as part of her MSc Museum Studies course at the University of Glasgow.

The Investigating the Past project on which the exhibition was based, focused on the archaeology of the first millennia in the Clyde and Avon Valley. The finds showcased within the display were primarily from Castledykes, the site of a Roman Fort situated in the Clyde Valley. All of the artefacts from Castledykes were found through field-walking, a non-invasive archaeological technique of recording and collecting artefacts found on the surface of the site. The exhibition featured Roman roof tiles, a bronze spear ferrule (used to attach a spear head to a shaft), and lead pieces. As well as fragments of; amphorae (jar/vase), a glass jug, fine ware pottery, and mortarium (large mixing bowl). Many of these objects are shown in the gallery below along with their descriptions. 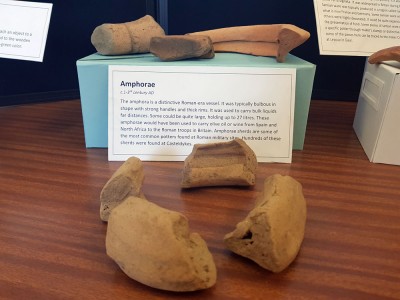 c.1st-3rd century AD The amphora is a distinctive Roman-era vessel. It was typically bulbous in shape with strong handles and thick rims. It was used to carry bulk liquids far distances. Some could be quite large, holding up to 27 litres. These amphorae would have been used to carry olive oil or wine from Spain and North Africa to the Roman troops in Britain. Amphorae sherds are some of the most common pottery found at Roman military sites. Hundreds of these sherds were found at Casteldykes. 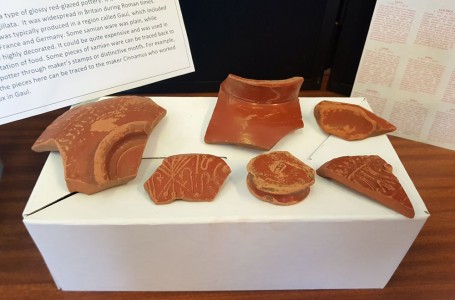 c.1st-2nd century AD Samian ware is a type of glossy red-glazed pottery. It is also sometimes called Terra Sigillata. It was widespread in Britain during Roman times. Samian ware was typically produced in a region called Gaul, which included what is now France and Germany. Some samian ware was plain, while others were highly decorated. It could be quite expensive and was used in the presentation of food. Some pieces of samian ware can be traced back to a specific potter through maker’s stamps or distinctive motifs. For example, some of the pieces here can be traced to the maker Cinnamus who worked at Lezoux in Gaul. 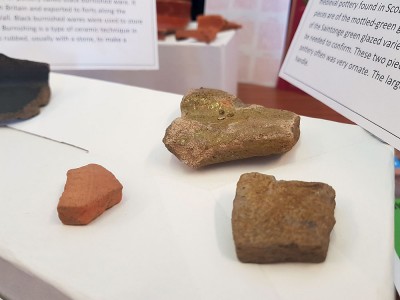 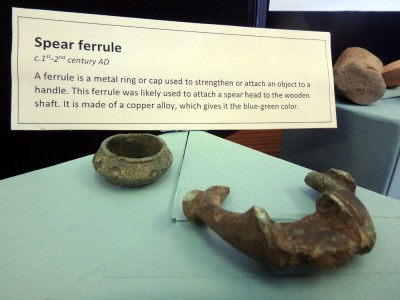 c.1st-2nd century AD A ferrule is a metal ring or cap used to strengthen or attach an object to a handle. This ferrule was likely used to attach a spear head to the wooden shaft. It is made of a bronze, a copper alloy, which gives it the blue-green color. 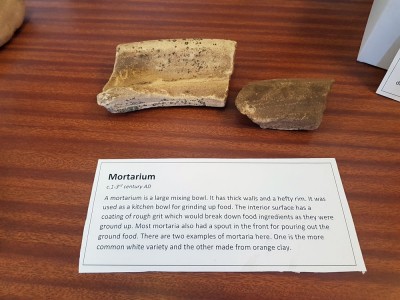 c.1st-3rd century AD A mortarium is a large mixing bowl. It has thick walls and a hefty rim. It was used as a kitchen bowl for grinding up food. The interior surface has a coating of rough grit which would break down food ingredients as they were ground up. Most mortaria also had a spout in the front for pouring out the ground food. There are two examples of mortaria here. One is the more common white variety and the other made from orange clay. 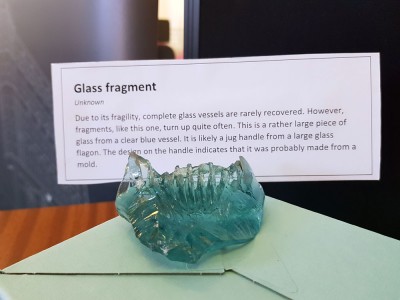 Unknown Due to its fragility, complete glass vessels are rarely recovered. However, fragments, like this one, turn up quite often. This is a rather large piece of glass from a clear blue vessel. It is likely a jug handle from a large glass flagon. The design on the handle indicates that it was probably made from a mold. 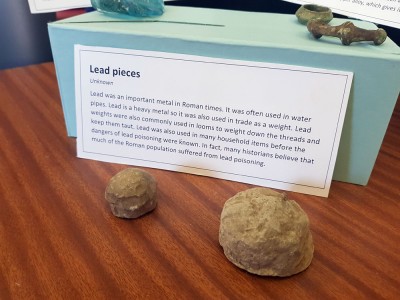 Unknown Lead was an important metal in Roman times. It was often used in water pipes. Lead is a heavy metal so it was also used in trade as a weight. Lead weights were also commonly used in looms to weight down the threads and keep them taut. Lead was also used in many household items before the dangers of lead poisoning were known. In fact, many historians believe that much of the Roman population suffered from lead poisoning. 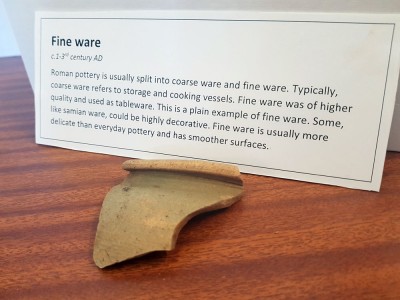 c.1st-3rd century AD Roman pottery is usually split into coarse ware and fine ware. Typically, coarse ware refers to storage and cooking vessels. Fine ware was of higher quality and used as tableware. This is a plain example of fine ware. Some, like samian ware, could be highly decorative. Fine ware is usually more delicate than everyday pottery and has smoother surfaces.

Also on display were some fragments of Samian ware, a red-glazed pottery which was widespread in Britain during Roman Times, made between 1st and 2nd century AD. Samian ware was usually produced in Gaul, which is modern day France and parts of Germany. Some pieces feature distinctive motifs and makers marks which can be used to trace them back to a specific potter. A few of the pieces on display were traced back to a specific marker known as Cinnamus who worked in Lezoux, Gaul. The 3D model featured further up this page is one of the pieces of Samian ware and below is the spear ferrule, which can be rotated around by clicking and dragging. The spear ferrule is in particularly good condition due to it being crafted from bronze rather than iron.

A few small finds from the Castle Qua dig were also on show at the exhibit. The Investigating the Past project excavations will continue at Black Hill, one of the largest Iron Age sites in the West of Scotland. To find out more about Castledykes or the Castle Qua and Black Hill excavations follow the links at the bottom of the page.

This exhibition was created as part of the Investigating the Past project. It was led by CAVLP Heritage, managed by Northlight Heritage, with support from Heritage Lottery Fund and LEADER supported Clyde and Avon Valley Landscape Partnership (CAVLP) and Historic Environment Scotland. 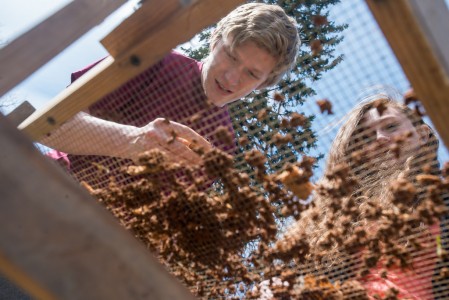