The Scottish Wildlife Trust Falls of the Clyde, nestled in the valley at New Lanark World Heritage Site, has long been a popular spot for visitors who are drawn by the spectacular woodlands, wildlife and scenery, topped off by Corra Linn – the largest waterfall by volume of water in Great Britain.

Part of the Clyde Valley Woodlands National Nature Reserve (NNR), a network of trails including the final section of the Clyde Walkway, take visitors through the gorge woodlands which contain three of the four waterfalls known collectively as the Falls of Clyde – Bonnington Linn, Corra Linn and Dundaff Linn. The fourth, Stonebyres Linn, can be found further downstream near Kirkfieldbank. Still in use today, Bonnington Hydro Electric Power Station was built to harness the power of Bonnington Linn and Corra Linn in 1926.

The Falls of Clyde lie between the Corehouse Estate and what was once Bonnington Estate. Although Bonnington House is now gone, elements of the designed landscape can still be traced on both sides of the river, blending in with the woodlands and wildlife. This includes the wonderful Corra Linn viewpoint overlooking Corra Linn from Corehouse Estate as well as features that can be discovered by following the Historic Trail. The Falls of Clyde were once an important stopping off point on the Petit Tours of Great Britain and have been immortalised in paintings by J.M.W.Turner and the writing of William and Dorothy Wordsworth amongst many others.

The ancient woodlands are home to a wide variety of native species. Over 100 bird species have been recorded including peregrines and kingfishers. In the evenings, badgers forage in the undergrowth while bats, including Pipistrelle and Daubenton’s bats swoop overhead. Look out for otters along the riverbank through the day. In summer, the woodland wildflowers burst into colour and in autumn, a myriad of weird and wonderful fungi can be seen.

The ruins of the 16th century Corra Castle also lie in the reserve. The seat of the Bannatyne family for over 300 years, the castle is now home to at least three species of nesting bats! 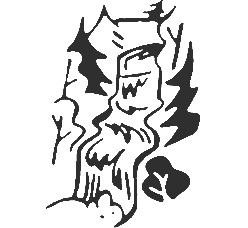